I am not great at handyperson work. I can clean, I can organize, I can approximate cooking even…but you might not want my “help” with “easy” fix-it things around the house.

I’m pretty sure as a child I absorbed the message from my dad that there is no such thing as easy where house projects are concerned. Any time he was working on something, my brother and I knew we’d get hauled to the hardware store at least three times and that my dad would be agitated until the project was done (meaning we knew to get lost). 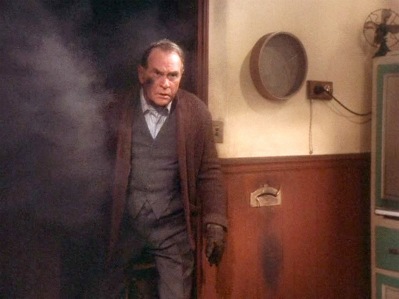 Cut to Alabama last week when I was drying some laundry and the machine kept shutting off and throwing an error code. I finally mentioned it to Amy, who calmly wondered whether I’d googled to find out what was wrong. Duh! GOOGLE ALL THINGS!!

The googs came back with: “If your LG clothes dryer is showing error code d80, d90, d95… this means there is an issue with AIRFLOW EXHAUST LINT BLOCKAGE.”

One point for technology! Thank you for telling me what you need, gorgeous and smart modern dryer!

I can clean out the exhaust line! That’ll be EASY!

Then I went outside to battle the end of the line: 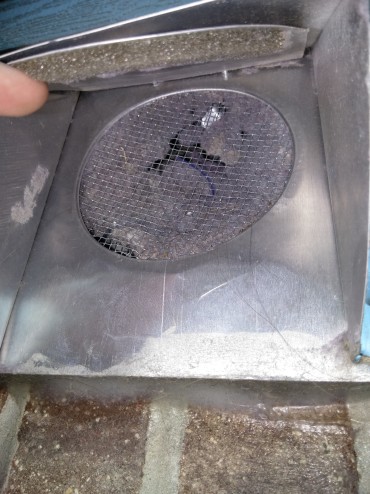 My finger is holding up the flap to reveal the screen.

As you can see, there was a pileup of lint on the screen. I had tried vacuuming it the previous day, but it wouldn’t budge. Being then left to my own clever devices while Amy was at work, I decided I would remove the entire vent cover—so I found a box cutter and carved into the clear, thick silicone caulk holding the cover to the house. It took a minute but finally I extricated it.

With only a naked exhaust pipe before me, I was able to stick my arm in up until about my elbow to pull out what lint I could reach. The bits I could see much further down the pipe I dragged out with the handle of a broom. All told I’d liberated at least four giant handfuls.

And then I got a text from Amy: “Advice from the guys at work is to clip off the mesh of the screen. Apparently most dryer vents do not have them.”

Me: “Oh. Too late. I cut all around it and pulled the whole thing off. But that’s a great idea. Wish I’d thought of it.”

I forced the cover back onto the pipe as it had been (trickier than you’d think because of siding butting up against the top of the pipe) and called it a day. It would need to be replaced or recaulked, but at least now I could get back into the laundry game!

A couple days later I had time to revisit the issue and here’s what I learned: It’s far more effective to clean out the exhaust pipe when the dryer is ON! (I don’t know that it’s advised, but it sure seemed to work!)

The dryer just happened to be running when I scaled the ladder and removed the vent cover (the screen of which had already become covered over again with lint). I was at eye level with the tube and of course looked directly into it. The hot air rushed at my face—followed by a massive pile of lint! (Oh to be a neighbor witnessing my surprise…)

Realizing I was onto something, I grabbed a mop whose head fit perfectly into the tube. I pushed it in as far as I could and when I pulled it out, another giant pile of lint blew swiftly into my face. (It was like a game to see how much I could dislodge and how much I could coat myself in lint dust.) 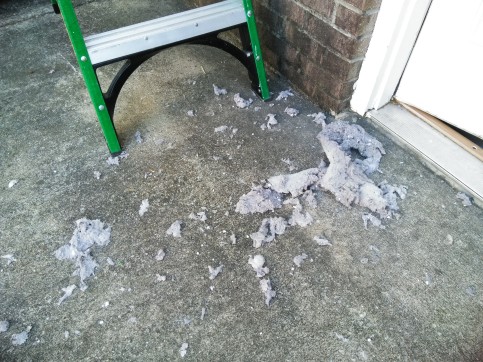 Later that evening, the friend who gave Amy a ride home from work was sweet enough to let me pick his brain about the new vent covers I’d purchased that weren’t fitting. Within minutes he had it sorted. He took a pair of regular scissors (I thought I needed wire cutters) and cut the screen out of the original cover. Then he drove home, returned a short time later with silicone caulk, and reaffixed the cover to the house. Done and done. Yeah!!

I learned more about dryer vent covers than I ever thought I’d know in my lifetime. And now you do, too: They should not have screens on them.