In my mid-twenties I worked for a brief six-month stint on the graveyard shift at the local blood center. Two things remain with me from that time.

First of all, I still cringe when I stumble across Public Radio International’s The World on Colorado Public Radio. I was awakened for every shift by its theme song:

This music inspires within me a wave of adrenaline and a wave of dread—simultaneously. It wasn’t my favorite job and the overnight shift took some getting used to. Waking up at 10:00 pm to go to work? Ugh!

But there was this one night…

The back doorbell buzzed, indicating a delivery. It was common for couriers to deliver body parts at all hours of the night in little coolers (usually eyeballs, as I recall). One night while I was signing in a cooler, the courier observed, “Wow! You hold your pen really tightly when you write. It looks like you’re actually cutting off circulation to your fingers.” I said, “Oh…yeah, I do have a tight grip. That’s just how I learned to write, I guess.”

This launched us into a conversation about graphology and I learned that this sweet white-haired man was trained in handwriting analysis. He didn’t need to analyze my handwriting, though, because he knew everything he needed to know about me from watching me hold the pen. He left me with [something approximating] these words: “I promise that your life will change when you learn to hold the pen more loosely.”

When he said this, I had that thing happen that happens when I’m hearing deep truth. It’s a split second of time standing still with a bit of fuzzy eye focus and lightheadedness. This means, “Erin, pay attention!”

I heard him. I heard his gentle implication that my tight grip on the pen was a manifestation of my mistrust of life. (That liberal arts degree pays off when attempting to discern subtle implications!)

I won’t lie. It took me a long time to re-learn to hold a pen after almost twenty years of using a death grip. 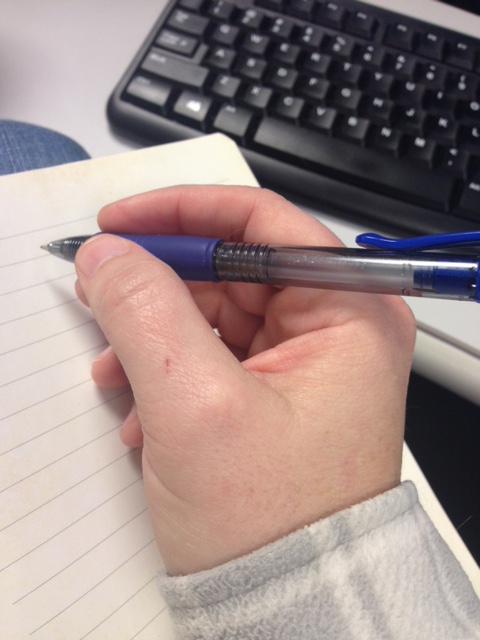 My handwriting suffered greatly for years but has finally found its way back to being legible. I still resort to the old way if I’m holding a crappy pen that won’t write, though I’m quick to notice it. I’m also now a pen snob and eschew any pen that’s not gel. I assume that as I grow more eccentric, I’ll one day be using an ink bottle and quill.

So why am I sharing this? Because during a recent coffee and coloring date with friends I realized I was using my old strangle-hold technique. My friends were holding their colored pencils oh so gently as we chatted, their arms and hands and shoulders relaxed…while I was overexerting and muscling and bullying. (Coloring loses a bit of its therapeutic effect when doing it the way I was doing it.) I became aware that I‘ve worked to write differently but not to color differently, which lit my mind up with questions.

In what areas of my life am I exerting too much control?

In what areas of my life am I in total allowance, trusting that I am fully supported?

Which areas of my life are in color? Which are in black and white?

What am I holding onto too tightly that I need to release (literally or figuratively)?

And, in case you’re wondering, the courier driver/graphologist was correct. There has been a pretty significant shift in my life since learning to lighten up my grip. It has lightened me up in other ways and it allows a greater flow of goodness into my life. I’ve been blessed with numerous situations in which letting go and trusting allowed just the right job/person/animal to enter my life…exactly on time.

And now for a quick coloring break…to practice lightening up.

One thought on “It’s Okay to Loosen Your Grip”