I’ve been going gray for many years. And while gray hair can be beautiful, I’ve also seen it make people look WAY older than their years. It can make someone otherwise youthful in appearance look drawn and wan. Knowing that I would likely be unable to recognize when enough was enough, I had entrusted a few friends over the years to tell me when the gray was too much, but that’s quite a burden to put on someone.

My first indication that I might want to take action was when I was dating a woman who was considerably older than me (15 years) and she stated that she liked my graying hair because it closed the age gap in our appearances. Say what?!

Then the next woman I hung out with stated that she thought gray was cool and had considered dying her own hair gray. I didn’t even know such a thing could happen…nor do I understand why it would. As Suzanne and I often joke, “Does not compute.”

My hair stylist has been very sweet about the whole thing. I asked her to tell me when the gray had gone too far and she said, “I absolutely respect your decision to do whatever is best for you. I would never pressure you into it. It’s not something to be taken lightly because once you start, it’s hard to stop.” Were we talking about coloring hair or doing drugs?!

The struggle has been real. The thought of putting CHEMICALS on my scalp (near which is my BRAIN, which already doesn’t hold onto many memories) was just never something that made sense to me. Women the world over do it without a second thought and yet there I was…giving it a third thought and a fourth and a fifteen-hundredth. I have never been able to make that beauty choice add up in my head to “worth it.” Nor, quite frankly, is it in my budget to pay someone to do it well.

Now enter Hairprint. Here’s a picture of the box. Even the BOX is beautiful. (That’s a box joke for my friend Maureen D.)

I discovered this product quite by accident while strolling around the interwebs one day. I started reading it with the excitement of a child on Christmas morning. Could it be true that my hair dilemma has a nontoxic solution?!! YESSSS!!

As the website explains, this is how Hairprint works (and it’s only for naturally brown- and black-haired people):

Hairprint creates a process whereby the natural pigment in your hair called eumelanin is recreated in the hair shaft. Eumelanin is arranged in the hair in a pattern unique to each person. We coined a word to name that unique pattern: Hairprint. That pattern determines how we see color.  When eumelanin is restored to the shaft of the hair, your innate hair color returns.

There are EIGHT ingredients in this product and it’s totally nontoxic. And the coolest part: the color it turns my hair will be totally different from the color it will turn someone else’s hair (because it does not work like chemical dyes).

So…my friend Suzanne took some extensive time out of her day to play hair with me. She very patiently led me through the entire process and here are the results: 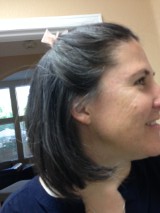 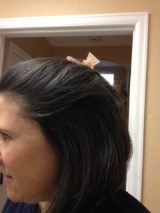 The lighting in these photos is tricky because I was standing under a fluorescent light, but I think they capture the gist. For a first attempt, I’m thrilled with the results. I still have some sparkles where it didn’t take completely, but overall it’s nothing short of a miracle to see my original hair color restored. I’ve always loved my dark brown hair. Even my brother has always been envious that I got the “good hair,” as he calls it (his is much lighter and thinner). And no joke, the treatment left my hair soft as a baby’s butt. And it was an added benefit that Suzanne has salon-quality shampoo and conditioner that left me with that just-from-the-salon smell.

So, my friends, the war has been won. The battle that still remains is learning how to apply it by myself so I won’t have to bug anyone else to help me. I think with a little practice and a lot of patience, I’ll be fine.

If you’ve been waiting to find a nontoxic solution for your graying hair, please check out the website. It even gives instructions for how someone who has used chemical dyes in the past can transition to Hairprint. This stuff is pure brilliant. I would become a salesperson for the product if they’d have me. Thank you, Dr. John Warner (of the Warner Babcock Institute for Green Chemistry in Massachusetts) for inventing a solution to a very real problem. 😉

3 thoughts on “How Hairprint Ended My Struggle”